The Akai AX80 is an 8 voice polyphonic analog synthesizer. The AX80 has two digitally controlled analog oscillators and a sub-oscillator for each of its eight voices. There are a total of four LFOs: two for oscillator pitch, one for the filter, and one modulating the pulse-width. It has a 24dB/octave four pole resonant low-pass filter and a 12dB/octave high-pass filter. The five octave keyboard is unweighted and is velocity sensitive. The fluorescent LED display shows all the parameter settings simultaneously. The AX80 has 64 user patches and an additional 32 factory patches. A sustain and program change pedal can be used. Patches can be saved and loaded via cassette tape. The AX80 was first released in 1984 by Akai Professional of Japan. 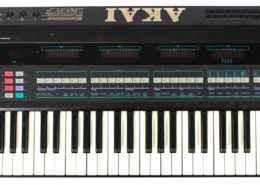