The M-Audio Venom is a 12 voice multi-timbral virtual analog synthesizer. The Venom is also a USB-compatible MIDI controller, and audio interface. You can play the Venom as a standalone synthesizer and use it as an audio mixer; or you can use it as a USB MIDI controller and audio interface with your computer. You can also use the Venom as an effects processor as the audio inputs on the Venom are routed through the multimode filter and on-board effects. The Venom also offers a 49-key velocity sensitive keyboard, octave up/down buttons, pitch bend and modulation wheels, sustain and expression pedal inputs, 4 multi-function encoder knobs, unison mode for voice stacking up to 12 voices, and up to 4 on-board phrase arpeggiators with tap tempo. The Venom was first released in 2010 by M-Audio of the U.S.A. 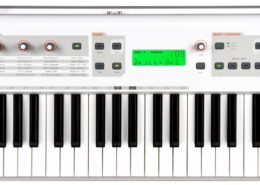