The Casio CZ-1000 is a 8 Voice Multi-Timbral Phase Distortion Digital Synthesizer. The CZ-1000 has four octaves made up of 49 standard keys. It has eight digitally controlled oscillators with eight digital waveforms to choose from, three of which have a resonant filter type sound. The entire CZ series uses what Casio called Phase Distortion. Phase Distortion attempts to simulate an analog resonant filter by modulating a waveform by another waveform creating a new waveform that has harmonics based on the two input waveforms. The CZ-1000 has an eight stage DCA with key follow. It also has a ring modulator and noise generator. The CZ-1000 has an LFO that can modulate the oscillator pitch. Multiple patches can be stacked together reducing the polyphony proportionately. There is a miniature version of the CZ-1000 called the CZ-101. The CZ-1000 was first released in 1985 by Casio Computer Company, Ltd. of Japan. 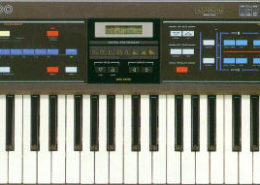